In the summer of 2006, Jesus spoke to Anne about Tearmann Anama (formerly Holy Trinity Abbey, Kilnacrott) Ireland.  This was an abbey run by an order of Norbertine priests.  It was to become a site of pilgrimage for the apostolate.  Anne received visions on what the place would become, and Jesus showed her the great graces that would be given to those who came to pray at the abbey.  Direction for Our Times began the long process of raising funds to purchase the abbey and arranging a purchasing agreement with the Norbertine priests living there. 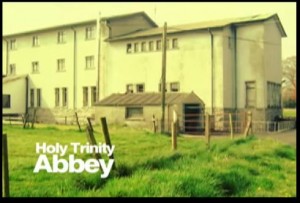 The following is an article written by Anne, a lay apostle, about the Abbey and what Jesus revealed to her regarding it.

We, Direction for Our Times, have acquired the property known as the Abbey. Yes, dear apostles, the Lay Apostolate of Jesus Christ the Returning King has a headquarters for the future! We are the official owners of Tearmann Anama (formerly Holy Trinity Abbey, Kilnacrott) Co. Cavan, Ireland. May God be praised. 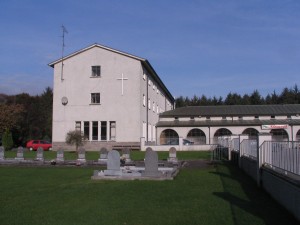 In the visions that I saw about the abbey I saw people praying with a terrific openness to the Lord. I saw people gazing up at the Lord. There is a gift that the Lord gives. It is a gift of experiencing His gaze, the gaze of Jesus Christ into you. And then the Holy Spirit connects the two of you and all this love and mercy pours in. It is this reciprocal response that bursts out of one of God’s children. So a soul experiences Jesus in intimacy and then a soul is prompted to work for Christ. Each one of us has a different plan for our time on earth, many people will say, “I don’t know what the Lord wants from me.” Very often the person could be doing exactly what the Lord wants. Their life could be just as the Lord needs it to be.

When I saw people praying, I saw some people being given a course correction, Jesus saying, “I have a new plan for you, I have an additional plan for you that is over and above what you are doing now.” And then I saw other people who experienced Jesus’ stamp of approval on just what they were doing. In other words they walked away convicted and peaceful about the service that they were offering heaven at that time. 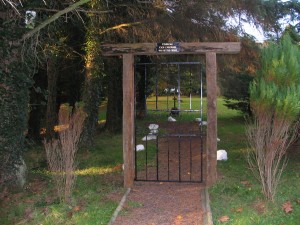 It’s a very beautiful grace, it’s a very desirable grace that the Lord is promising. When I saw the visions I saw the people praying so beautifully. I was enthralled by the way they were praying and I said “Lord what is this I am seeing here, why is their prayer so striking to me? Where have I seen this before?” And at that time I understood that I had seen people praying like this only in Purgatory. It was this beautiful, honest, truthful response to the presence of God and that’s how I understood this was going to be.

Part of this grace is the interior knowledge of the present condition of the soul. The introduction to God’s truth is what will happen here. Now sometimes it happens in different ways. It can happen instantaneously and completely and that has occurred to people, you know, we have seen people experience it that way. Then, on other times we have seen people experience it very gently, very gradually.

I would say to anyone who desires this and we all will benefit from it, “Venerate the Image of Jesus Christ the Returning King and ask for this illumination,” say, “Jesus please reveal this to me, I want to know the condition of my soul, I want to have a certainty about your will for me.” The Lord will be extremely generous in answering these prayers.

We are talking about a miraculous clarity. We are talking about a different grace that is uniquely granted by heaven for this time. The other thing is that when anyone makes a pilgrimage to this place, they will be bringing all of their loved ones mystically and that’s what Jesus intends to do. The conversions that occur will ripple out into the world. They will come. They will ask for the grace and they will obtain the grace. I know one of the people who has benefited terrifically from his pilgrimage to the abbey. He felt nothing unusual. He felt good, peaceful, and happy, there was Mass, it was a nice experience. And then he went home and everyone he prayed for within a week experienced an outpouring of God’s conversion grace. He was the errand boy. He came and he picked it up and he brought it back. That’s so beautiful. That’s how generous Jesus is.

When we talk about this grace, this is what the Lord said:

“This is not like something the world offers in the way of self awareness; souls do not and cannot work for this understanding. It is a heavenly light, a light that enables one to see the truth of their condition in relation to God. It is an understanding of the love of the Trinity for the created one. Spiritual gifts of this magnitude have never been granted to the degree at which I intend to grant them in this time.”

It’s a very serious concession to what the Lord needs from us as serving apostles so we would want to be very reverent, very serious about consideration of this. When I contemplated what the Lord was promising.  I got very concerned. For about a day and a half I thought, “This is very generous and I thought, this is serious because a soul who experiences this will be obligated. I was afraid for souls because I was afraid that they would be accountable. Jesus explained it to me this way, He didn’t want me to worry about it:

“You are simply looking at one part of the gift Anne; you must understand the gift in its entirety. The Saviour would not give a soul an appliance if the soul could not plug it in to a power source. Do you see how your Jesus stoops to give you information in ways that you can understand? My Anne worries without cause. I will send such ongoing grace to the soul that the soul will have to reject his eternity in order to be held accountable.”

So, in other words, it’s impossible, any soul who wants Christ shall have Him.

“Anne, it is to save souls that I have come, not to condemn them. Souls will respond. You need not worry that Jesus will come away empty handed. I will bring the Father a multitude of souls with this gift.”

Those are beautiful promises and people won’t disappoint them, they will respond, how could they not, when they are blessed in this way. We all know that one person could look at a crucifix and stare at the crucifix for a year and not get it and think, “There were some really bad people during that time and that man was foolish. Another soul accompanied by grace can stare at a crucifix and in an instant get the whole thing. Grace is a gift, it is not something we can manufacture or produce, it only comes from God. Some people do not want this gift, other people really desire this gift. God will bless everybody.

That is a summary of the grace, the gift that the Lord wants to flow through this apostolate and through other apostolate of mercy at this time. It is an illumination. It is clarity. It is a conviction that we are citizens of heaven called to serve God and what Jesus needs now is committed lay apostles. The way Jesus is going to get them is by a great big blessing, a grace, a gift of grace.